The S-XT is a press system with high stroke rates and the highest precision developed for the production of tungsten carbide tips. 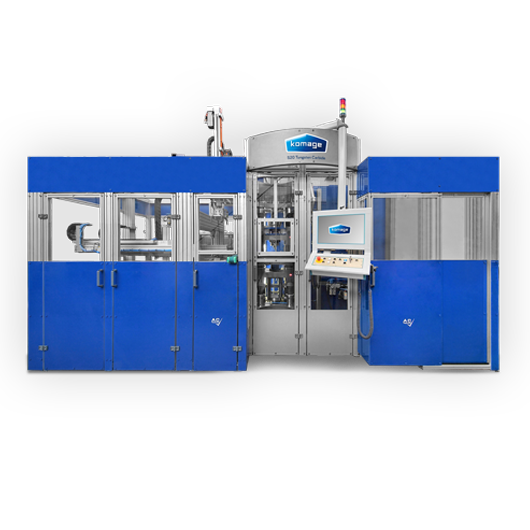 Press tools with minimum tool tolerance are used for the production of tungsten carbide tips. Frequent product changes due to small series require short tool change times which can only be realized with quick-change clamping systems. For this reason, the S-XT is fitted with high-precision guides for all pressing axes which meet these requirements.

In order to take full advantage of quick-change clamping systems, the die plate can be loosened with a fast displacement unit and moved. In this case, the fill shoe can remain on the die plate and need not be removed.
Thanks to its X shape, the S-XT is easily accessible from all sides; the fill hopper and automation are as close as possible to the press tool.
The press system has an automatic withdrawal system which removes the parts from the press tool, weighs and cleans them, and places them on a sinter tray. The empty and loaded sinter trays are fed in as a stack with the help of magazine carts so that autonomous production is possible. The withdrawal system is further used for cleaning the tools so that surfaces such as the contours of the tool can be cleaned thanks to a freely programmable cleaning sequence of the servo axes. Lateral contours can be pressed in optionally by our patented cross pressing device.

Press and handling system have a common control system and data management which means that withdrawal of the parts can be optimally incorporated in the press cycle. The integrated operating concept eliminates interface problems, prevents operating errors and minimizes the amount of training for operating staff.