The S-DT is a press system specifically developed for
the production of zirconium dioxide blanks in dental ceramics. 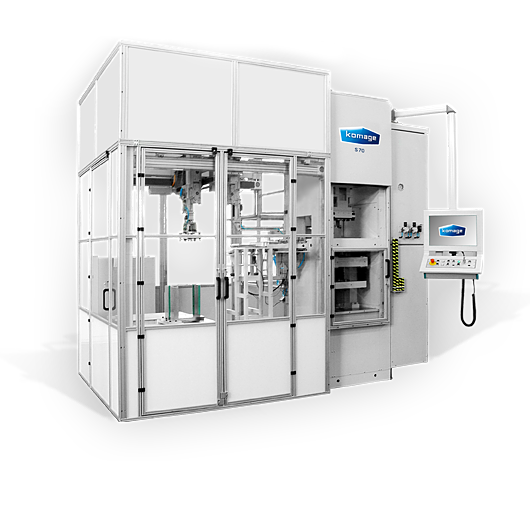 The pressing process is controlled and monitored starting with a specially adapted powder feed, via the compacting process up to the moment when the finished pressed part leaves the system. This is made possible due to highly accurate press force detection which regulates the force required for compaction. In addition, the pressed part is demolded under a sensitively adjustable applied load force to enable crack-free demolding. All the measures taken are aimed at keeping the density constant for all the pressed parts of a batch.

The S-DT press system can be equipped with tailor-made automation solutions. As a result, the pressed blank can be weighed, cleaned and measured after removal. All parameters of the pressed blank are stored in the production data acquisition system and assigned to the relevant product as its production history. The blank is subsequently set down on a sintering plate. The fully loaded sintering plates are then formed into a stack which can be transported directly into the sintering furnace.

The S-DT press and the handling system have a common control system and data management which means that withdrawal of the parts can be optimally incorporated in the press cycle. The integrated operating concept eliminates interface problems, prevents operating errors and minimizes the amount of training for operating staff.