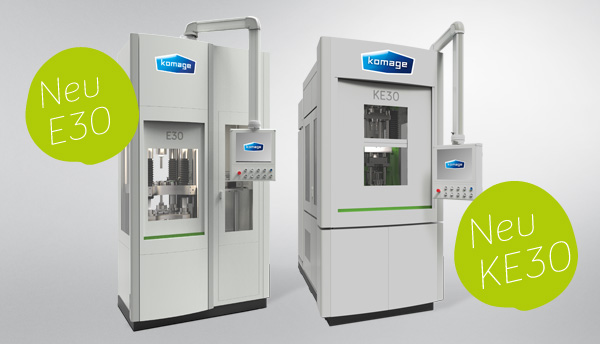 The company’s press systems rely on mechanical, hydraulic and electric drives. Where the strength of different drive concepts can be combined, they are jointly used. Decades of experience in building hydraulic presses in ejection method and the worldwide success of this concept led Komage to de-velop a servo-electric ejection press, the new E-line. This press operates, as all Komage multi-level presses, without fixed stops and is freely programmable. Due to the fact that the punches hold freely in press position, the pressure on the press part can be relieved in both axial directions, contrary to pressing with fixed stops. Punch compression and spring back effect can therefore be compensated; this ensures a crack-free removal of the press part. Furthermore, the constant removal height of the parts due to the ejection method enables the easy and cost effective realization of all automation solutions and fill devices.

At the Ceramitec 2015, the E30 from Komage will be presented to the world public for the first time and comes with a drive technology that was tested under extreme conditions, which prevents a punctual wear of the drive components. Such a wear occurs with conventional servo drives, because the same press position is always approached during pressing, causing the drive to be loaded with the highest force at the same position. Consequently, the spindle gets damaged and reduces the lifetime of the drive significantly.  As a result, the axes do not run smoothly anymore, and the noise is getting louder until the drive must finally be replaced.

In addition to this new development, Komage also introduces an innovative further development of mechanical presses. Worldwide, mechanical presses are deployed and will have to be replaced in the near future. Required are economic press concepts that are superior to purely mechanical presses. Precisely this requirement is fulfilled by the Komage KE-line. It combines the advantages of a me-chanical press with the flexibility of a servo-electric drive. The application of the withdrawal method makes the replacement of a traditional mechanical press with further use of existing adapters and tools possible. The KE-line merely requires a single programming based on the existing mechanical set-up data. The transferred programs are stored in the press control system and can be recalled at any time. New programs are issued directly via the program generator KOMPART, which makes pro-gramming fast and simple. The set-up times are significantly reduced, acquisition- as well as operat-ing costs are considerably minimized.

While the movements of mechanical presses are defined, the KE-line features servo-electrical closed loop controlled and free-programmable die- and fill movements. Due to this additionally gained flex-ibility, all fill techniques and press methods are possible. Therefore, the new KE-line can realize the production of parts which could not be pressed on a conventional mechanical press. This enhance-ment increases the variety of the manufacturable products significantly.